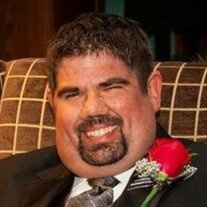 He was born on December 2, 1989 in Orlando, Florida. Dereck graduated from Mukwonago High School and was a member of Fox River Christian Church. He will be remembered for his love of cooking, St. Louis Cardinals and NASCAR. Dereck loved meeting new people and talking to them.
He will be sadly missed by his father, Terry Potkovic of Sanford, FL and his mother, Lynette (Joe) Hartl of Mukwonago, WI; his brothers, Victor Licata and Isaac Schumacher both of Mukwonago, WI and step father James Schumacher also of Mukwonago, WI. He is further survived by his step brother, Ricky Schumacher; step sisters, Annika Potkovic, Nicole Schumacher, Tamorra DeLong and Jaimi Upthegrove; grandparents, Linda & Julius Potkovic, Christine Keith, Jane Schumacher, Gloria & James Werwinski, and Mark Hartl. Many aunts, uncles, cousins and extended family also survive.

He was preceded in death by grandfathers, Theodore R. Hartl and Gerald Schumacher.

Memorials are appreciated to the family to help off- set funeral expenses. Online condolences may be sent to the family at www. argoruestmanharris.com.

To send flowers to the family or plant a tree in memory of Dereck Potkovic, please visit our floral store.

To send flowers to the family in memory of Dereck Potkovic, please visit our flower store.