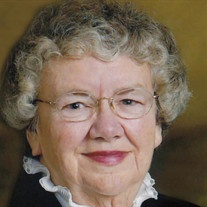 Dorothy Armstrong, 80, of Washington passed away on March 6, 2017 at home, surrounded by family. She had fought a brief and brave battle against cancer.

Dorothy was born on August 12, 1936 in Beaver Dam, Wisconsin to Berger and Ellen Nielsen Sandstrom. She married Elmer Armstrong on April 10, 1955. He survives.

Dorothy attended Eureka High School where she graduated in the top ten percent of her class. She enjoyed writing stories and poems and served as editor of the school newspaper and yearbook. She played clarinet in the marching band.

Throughout her life Dorothy demonstrated an uncommonly strong work ethic. In her teenage years she worked alongside her mother at the Libby Canning Factory in Eureka. Later she was employed at the Village Baker bakery on the square in Washington.

For her husband Elmer she was a deeply involved partner on the family farm in Washington. Together they built it into a successful operation and perfect home for their sons. Dorothy proved to be an exceptional bookkeeper and always had hearty meals ready for farm help. She could also be found on hot summer days in the fields herself, often behind the wheel of the 1206 tractor pulling the hay baler.

Dorothy fiercely supported her sons' ambitions at every stage of their lives - chaperoning their Pleasant View Elementary class field trips, volunteering numerous times to be a room mother and becoming an officer in the school's Community Club. She continued showing the same devotion to her beloved grandchildren and great-grandchildren.

She was a member of St. Mark's Lutheran Church in Washington and exemplified the highest values of her Christian faith. Funeral services will be held at her church at 11:00 am on Friday, March 10, 2017. Pastor Dick Hanson and Pastor Youngshim Pitcher will officiate. Visitation will be held on Thursday evening from 4-6 pm at the Argo-Ruestman-Harris Funeral Home in Eureka and one hour prior to the funeral service at the church. Burial will be in Olio Township Cemetery in Eureka.

The family asks that in lieu of flowers, donations be given in Dorothy's memory to the St. Mark's Lutheran Church Parish Nurses Program. Online condolences may be sent to the family at www.argoruestmanharris.com.

To send flowers to the family or plant a tree in memory of Dorothy Armstrong, please visit our floral store.

Please click here to view the video tribute
To send flowers to the family in memory of Dorothy Armstrong, please visit our flower store.