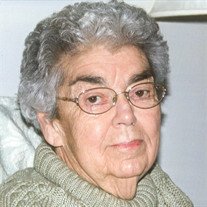 Surviving is one daughter, Diane (Max) Pierson of Macomb, IL;...

Edith graduated from (ISNU) Illinois State Normal University in 1947 with a bachelor's degree in business education. She used that education to teach at Eureka High School from 1968 to 1979. She also did bookkeeping work for her husband at Dickey's State Farm Insurance Agency. She was a member of Eureka Christian Church and its Golden Circle Class for over 60 years. She was also a member of AAUW (American Association of University Women), CWF (Christian Women Foundation), and 20th Century Book Club.

Funeral services will be held at 11 a.m., Monday, July 11, 2016 at Argo-Ruestman-Harris Funeral Home in Eureka. Pastor Lucy Maier will officiate. Visitation will be one hour prior to services at the funeral home. Burial will be in Olio Township Cemetery.

Memorials may be made to Eureka Christian Church or JDRF (Juvenile Diabetes Research Foundation.)

Please send flowers to the family’s home via our 100% guaranteed hand-delivered floral services.

Plant a tree in memory of Edith

I am so sorry that we didn't get up to the visitation. Got out of the office at 11:30 and could not make other arrangements. I wanted the family to know how much we cared about Edith and Clarence. I was lucky to spend time with her the last couple years at Maple Lawn...what a sweetheart. Never complaining, always a kind word. My prayers are with you now as you try to find a new normal to fill the void she leaves behind. May your memories bring you great comfort. Bernie and Sue Bucher

Don, Barb, Rachel, and Gwen, our sympathies to all of you. I remember meeting your mom and dad at one of your Indy 500 barbecues, Don. Nice people. Lynne and Randy

You were great and cherished friends. Thank you for your thoughts.

Sending sympathy to you at the death of your mother. We enjoyed many years with your parents at Gulf Shores, Al. Les and Sara Roth

Secret Garden Basket was purchased for the family of Edith Dickey.

Plant a tree in memory of Edith