Plant a tree in memory of Herman
An environmentally-friendly option 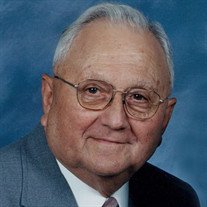 Also preceding him in death is one brother, Oscar and two infant siblings.

Surviving are one sister Augusta "Tootie" Folkers of Dwight, IL; one...

Also preceding him in death is one brother, Oscar and two infant siblings.

Surviving are one sister Augusta "Tootie" Folkers of Dwight, IL; one sister-in-law Erma Reich of Aurora; and several nieces and nephews.

Herman served in the U.S. Army Medical Corps during WWII and was stationed in Africa, Italy, France and Germany.

He worked for Caterpillar for 42 years retiring as a quality control analyst, a division of the inspection department.

Herman was one of 60 members who built Trinity Lutheran Church in El Paso along with it's Parish Hall and Parsonage. It was a five-year project. He was also instrumental in building the educational wing to the Parish Hall. He served as Vice President, Elder, Financial Secretary, and 38 years as the Memorial Secretary Treasurer.

Funeral services will be held at 10:00 am on Friday, July 8, 2016 at Trinity Lutheran Church in El Paso. Pastor Jonathan Boehne will officiate. Visitation will be from 9:30 to 10:00 am prior to services at the church. Graveside services will be at 12:00 noon in Olio Township Cemetery in Eureka.

Memorials may be made to the Trinity Lutheran Preschool.

Plant a tree in memory of Herman by clicking here.

Plant a tree in memory of Herman
An environmentally-friendly option

Plant a tree in memory of Herman

Celebrating the life of Herman Reich

Be the first to share your favorite memory, photo or story of Herman. This memorial page is dedicated for family, friends and future generations to celebrate the life of their loved one.

We ask on behalf of the family that you keep your comments uplifting and appropriate to help all who come here to find comfort and healing.

Plant a tree in memory of Herman