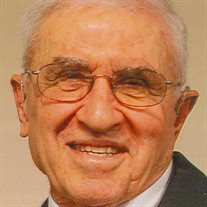 Robert "Bob" Keith Zimmerman, 91, of Morton, formerly of Hudson, passed away at 12:55 a.m., Saturday, December 16, 2017 at his daughter's residence in Washington, IL with family by his side.

He was preceded in death by his first wife Betty, daughter Cynthia Pepper, close personal friend Audrey Kool and one sister Joyce Morrison.

Bob was a WWII Army veteran, a member of Hudson United Methodist Church and life member of the Bloomington Elks Lodge 281. He also served as the Hudson Ag 4-H leader for 10 years.

Bob was well known for his outstanding pitching ability in fast pitch softball. He played for the Hudson fast pitch team and was recruited to pitch for many other teams during tournament time. He was a life-long Chicago Cubs fan and was overjoyed to finally see them win the World Series. Bob was also very well known for his wine making ability. He enjoyed cooking and hanging out with the Milk House Gang, fishing, raising rabbits with his two daughters and traveling with his family to shows throughout the state. Bob enjoyed spending time with friends and family fishing and telling stories at his pond.

A funeral service will be held at 10 a.m., Thursday, December 21, 2017 at Hudson United Methodist Church. Rev. Dr. Curt Keller and Rev. Tom Zobrist will officiate. Visitation will be from 2 to 6 p.m., Wednesday at Argo-Ruestman-Harris Funeral Home in Eureka. Burial will be in Hudson Cemetery.

Memorials may be made to Hudson United Methodist Church or Advocate BroMenn Hospice for nursing education.


To send flowers to the family or plant a tree in memory of Robert "Bob" K. Zimmerman, please visit our floral store.

Please click here to view the video tribute
To send flowers to the family in memory of Robert Zimmerman, please visit our flower store.