Plant a tree in memory of Velda
An environmentally-friendly option 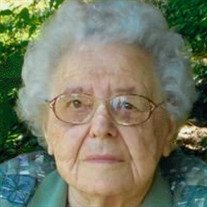 She was preceded in death by her parents, two brothers, and one sister.

Velda was a school teacher during WWII and she was a homemaker living on the family farm.

Velda volunteered at the Eureka Hospital and Maple Lawn for many years. She was an avid reader who enjoyed a good book.

She was a member of the Roanoke Mennonite Church where she was active in her earlier years.

Funeral services will be held at 10:30 am on Monday, December 12, 2016 at the Roanoke Mennonite Church. Pastor Phil Bachman will officiate. Visitation will be held on Sunday from 2-4 pm at the Argo-Ruestman-Harris Funeral Home in Eureka and from 10-10:30 on Monday before the service at the church. Private family burial will be at Roanoke Mennonite Cemetery.

Memorial contributions may be made to Advocate Hospice or Peoria Rescue Ministries.
Online tributes and condolences may be made at www.argoruestmanharris.com.

Plant a tree in memory of Velda by clicking here.

Plant a tree in memory of Velda
An environmentally-friendly option

Plant a tree in memory of Velda

Praying for all of you. We will be at the funeral on Monday. Dennis & Martha

Simply Elegant Spathiphyllum was purchased for the family of Velda Householter.

Our thoughts and prayers are with you...as heaven rejoices. Hugs Jerry and Valerie

Our deepest sympathy to Velds family in the passing of a lovely lady! Seeing Velda at the front desk at the hospital always gave me joy. We had many conversations between her escorting patients to their appointments and her devotion to reading in every break between volunteer duties! What an energetic woman!

So sorry to hear of Velda's passing for your family but I am sure she is so happy is heaven. I remember her always from church and know she was a wonderful homemaker. Our love and prayers go out to your family at this time. We are celebrating her life with you. Sue and Cecil Graber

Plant a tree in memory of Velda