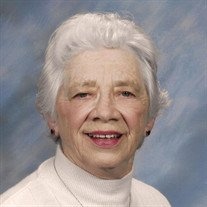 Annette Dyar Sherman, 100, of Eureka, passed away at 9:30 a.m., Sunday, August 30, 2020 at the Apostolic Christian Home of Roanoke. She was born October 23, 1919 and grew up during the Great Depression. One of six children, her parents were Wilmer and Grace (Fish) Dyar, who predeceased her in death, as did her brothers Howard, Eugene, Paul, and Jack and her sister, Mary Grace (Mansfield). Annette married William Elliott in 1947 in New York City, and they had three children: Susan, Catherine (McEwen), and John. She had five grandchildren: Frank, Melissa, Abigail, Danielle, and Dianna, as well as a great-granddaughter, Alayna.
Annette attended Davenport Grade School. Eureka H.S., and Eureka College, from where she graduated in 1941 with a BA degree. She received a B.L.S. degree in Library Science from the University of Illinois in 1942, after which she worked as a Cryptanalytic aide for the U. S. Army Signal Corps during WWII. She worked at the New York Public Library from 1946 to 1970 and then for the Miami-Dade Public Library System from 1970 to 1986, during which she became the branch librarian in charge of the Miami Springs branch.
After retirement, Annette lived in Marietta, Georgia from 1991 to 2001 to be near her children and grandchildren. While she was there, she was active in the John Knox Presbyterian Church, singing in the choir. It was there she met and married Forman Sherman in 1995 and traveled extensively to Europe with him before he died in 1997. When she returned to Eureka in 2002, she was active in the Eureka Christian Church, singing in the choir until age 95. She was also quite involved in Eureka College events, even attending classes each semester.
Always connected to the community, she belonged to the Eureka College Alumni Board, Women's Board, Delta Delta Pi Sorority, AAUW, ENK, 4G and 20th Century. In 2010, she was awarded the Eureka College Alumni Award of Merit.
Annette was a devoted mother and grandmother and kept in constant touch with her family, even though they lived in various areas of the United States.
Cremation will be accorded. A celebration of life service will be held at a later date. Argo-Ruestman-Harris Funeral Home is assisting the family with arrangements. Burial of her cremains will be in Olio Township Cemetery.
Memorial contributions may be made to Eureka College or Eureka Christian Church.
Online tributes and condolences may be made at www.argoruestmanharris.com.

To send flowers to the family or plant a tree in memory of Annette Dyar Sherman, please visit our floral store.

To send flowers to the family in memory of Annette Sherman, please visit our flower store.