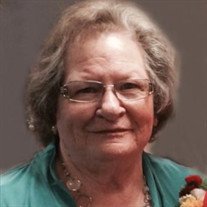 Barbara Jean Hagner, 79, of Roanoke, IL passed away on Wednesday, September 21, 2016 at OSF St. Francis Medical Center after a courageous battle with cancer.

Her memorial service will be at 11am on Saturday, September 24, 2016 at Argo-Ruestman-Harris Funeral Home in Eureka.

Barbara went home to be with her Lord and Savior on September 21, 2016. She was born on April 28, 1937 in Bulls Gap, TN a daughter of Henry and Hettie Lula Ruth (Houston) Voiles. She married Charles Hagner in November 1958 in Poplar Grove, IL. He passed away in December of 2001. Barbara was preceded in death by her parents, husband, 1 sister and 2 brothers.

Her favorite activities were bird watching, frequent trips out West, flowers, and doing needle point. Her greatest enjoyment was spending time with family and friends.

She worked as an LPN for the Apostolic Christian Home in Roanoke and did Community Care in home healthcare. Her love for others was demonstrated by her 50 plus years in healthcare.

In lieu of flowers, memorial contributions can be made to OSF Wound Care Clinic.

To send flowers to the family or plant a tree in memory of Barbara Jean Hagner, please visit our floral store.

To send flowers to the family in memory of Barbara Hagner, please visit our flower store.