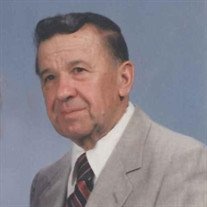 Eureka-Bernard "Bernie" Krumholz, 88, of Eureka, IL passed away at 11:42a.m. on Monday, March 23, 2015 at OSF St. Francis Medical Center in Peoria.
He was born on December 14, 1926 in Metamora, IL a son of Daniel and Marie Michael Krumholz. He married Joanne Bechtel on June 3, 1950 in Washington, IL. She survives.
Also surviving are two daughters, Jill(Jim) Harper of Washington, IL; Robin(William) Riley of Secor; one son, Tom(Lynn) Krumholz of Eureka, IL; three brothers; three sisters; six grandchildren; 12 great-granchildren.
He was preceded in death by his parents and one sister.
Bernie founded Krumholz Trucking in 1951 retiring in 2010.
He was a member of Midwest Truckers Northern Advisory Board, St. Luke's Mens Club and St. Luke's Catholic Church.
Bernie was a die hard Cubs fan.
Bernie was a steward of the land.
Funeral mass will be held at 10:00a.m. on Thursday, March 26, 2015 at St. Luke's Catholic Church in Eureka. Father Eugene Radosevich will officiate. Visitation will be held from 4-7p.m. on Wednesday, March 25, 2015 at Argo-Ruestman-Harris Funeral Home in Eureka. Burial will be in Olio Township Cemetery in Eureka.
Memorials may be made to St. Luke's Catholic Church or Charity of Donor's Choice. Online tributes and condolences may be made at www.argoruestmanharris.com.

To send flowers to the family or plant a tree in memory of Bernie Krumholz, please visit our floral store.

To send flowers to the family in memory of Bernie Krumholz, please visit our flower store.