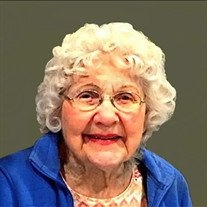 Bessie S. Bates, 96, of Eureka, passed away at 11:55 p.m. on Saturday, December 21, 2019, at the Apostolic Christian Home of Eureka.
She was born on January 28, 1923, in Hoisington, KS, to Philip Cornelius and Hattie Sue Omer Kopplin. She married Shelley Lee Bates on July 6, 1946, in Kansas City, KS. He passed away on February 28, 2001.
Surviving is one daughter: Janet (James) Wuellner of Avon, Indiana; one son: Charles (Julie) Bates of Metamora; four grandchildren: Mark (Sara) Wuellner, Laura (Anthony Clarke) Wuellner, Scott Bates, and Jeffrey Bates; two great-grandchildren: Fay Wuellner and Miles Wuellner. She was preceded in death by her parents, her husband, one brother and three sisters.
Bessie was a homemaker and a member of the First Christian Church of Chicago Heights from the 1950s to the 2000s where she actively volunteered as a deacon, youth group leader and helped with many church functions. She was an avid golfer and sports fan, supporting the Chicago White Sox and Kansas University (KU) college basketball. There were many times she could be heard cheering Rock! Chalk! Jayhawk! While watching their games.
Memorial services will be held on Saturday, December 28, 2019, at 11:00 a.m. at Argo-Ruestman-Harris Funeral Home in Eureka. Visitation will be one hour prior to services at the funeral home. Cremation rites will be accorded.
Memorial contributions may be made to OSF Hospice or the Apostolic Christian Home of Eureka. Online tributes and condolences may be sent to the family at argoruestmanharris.com.


To send flowers to the family or plant a tree in memory of Bessie S. Bates, please visit our floral store.

Please click here to view the video tribute
To send flowers to the family in memory of Bessie Bates, please visit our flower store.