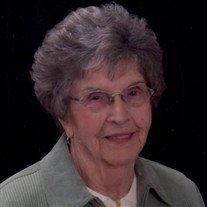 She was preceded in death by her parents, one brother, Cletus Smucker and one infant sister.

Betty graduated from Buda High School in 1942. She attended ISNU (now ISU) from 1943-1944 where she was the captain of the women's basketball team.

Betty and Wayne enjoyed traveling to Canada, Brazil, Peru, Australia, New Zealand, Haiti, and Germany. In retirement they spent winters in Bradenton, FL where they had many great times golfing and getting together with friends.

Betty was an accomplished homemaker excelling in sewing, crocheting, cooking, and gardening. She had a keen eye for design in home-decorating and clothing.
She used these skills as a devoted mother, grandmother, and great-grandmother. Throughout the years her center was always her family, and her considerable energy and work was directed for their benefit.

Memorials may be made to the Roanoke Mennonite Church, the Apostolic Christian Home of Eureka, or a charity of the donor's choice. Online tributes and condolences may be sent to the family at www.argoruestmanharris.com.

To send flowers to the family or plant a tree in memory of Betty Jean Schertz, please visit our floral store.

Please click here to view the video tribute
To send flowers to the family in memory of Betty Schertz, please visit our flower store.