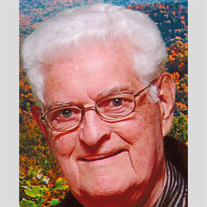 Eureka- Donald W. "Bill" Eastman, 86, of Eureka, IL passed away peacefully at 12:30 a.m. on Sunday, October 1, 2017 at the Eureka Apostolic Christian Home surrounded by his family.

He worked for Caterpillar as an analyst for many years and retired from the company.

Bill loved his family and will be greatly missed by them all.

Bill was a member of the Grace Church of the Nazarene in Eureka, where funeral services will be held at 10:00 a.m. on Friday, October 6, 2017. Pastor Michael Stipp will officiate. Visitation will be held on Thursday, October 5, 2017 from 4-7p.m. at the Argo-Ruestman-Harris Funeral Home in Eureka. Burial will be held in Olio Township Cemetery in Eureka.

Memorial contributions may be made to St. Jude Midwest Affiliate, Woodford County Relay for Life or Grace Church of the Nazarene in Eureka. Online condolences may be sent to the family at www.argoruestmanharris.com.

To send flowers to the family or plant a tree in memory of Bill Eastman, please visit our floral store.

Please click here to view the video tribute
To send flowers to the family in memory of Bill Eastman, please visit our flower store.