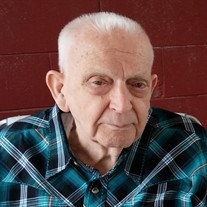 He was preceded in death by his parents, one infant grandson, one sister, and three brothers.

He was a Justice of the Peace, Police Magistrate, Goodfield volunteer fireman and was fire chief for 2 years. He was a little league coach, umpire, and charter member of the EYRA. He was also a member of the Crossroads Free Will Baptist Church in Leoma, TN.

He loved his family and was a devoted and loving husband, father, grandpa and great-grandpa.
He will be deeply missed by his family.

Funeral services will be held at 10:30 a.m. on Friday, December 18, 2015 at Argo-Ruestman-Harris Funeral Home in Eureka. Elder Dan Aders will officiate. Visitation will be held on Thursday, December 17, 2015 from 6-8 p.m. and one hour before services on Friday both at the funeral home. Burial will be in Olio Township Cemetery in Eureka.

Memorial contributions may be made to the Goodfield Fire Department or Charity of the Donor's Choice. Online condolences and tributes may be sent to the family at www.argoruestmanharris.com


To send flowers to the family or plant a tree in memory of Billie W. Scott, please visit our floral store.

Please click here to view the video tribute
To send flowers to the family in memory of Billie Scott, please visit our flower store.