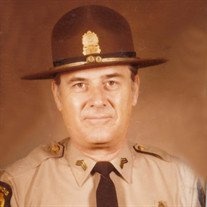 Eureka-Billy W. Taylor, 83, of Eureka, IL passed away at 6:55 am on Saturday, January 24, 2015 at Maple Lawn Health Center where he had been a resident for the past four months.

He was born on February 4, 1931 in Benton, IL to Henry and Ruth Ward Taylor. He married Sylvia Niana on February 14, 1953 in West Frankfort, IL. She survives.

He was preceded in death by his parents and three brothers.

Billy graduated in 1953 from the Illinois State Police Academy and was assigned to Eureka where he worked in the State Police District 8 until his retirement in 1982. He had attained the rank of Master Sergeant. During his time there he coordinated the area police forces with the Secret Service when Presidential trips came to Peoria.

He was a Korean War veteran and was a member of the American Legion Post #466 in Eureka. He was also a member of Father Menco Knights of Columbus 6707 in Washington.

Billy was a member of St. Luke's Catholic Church in Eureka where funeral mass will be held at 10:30 am on Tuesday, January 27, 2015. Father Eugene Radosevich will officiate. Visitation will be held on Monday evening from 4-7 pm at the Argo-Ruestman-Harris Funeral Home in Eureka. Burial will be in Olio Township Cemetery.

Memorial contributions may be made to St. Luke's Catholic Church and Advocate Eureka Hospital Building Fund. Online condolences may be sent to the family at www.argoruestmanharris.com.

To send flowers to the family or plant a tree in memory of Billy W. Taylor, please visit our floral store.

To send flowers to the family in memory of Billy Taylor, please visit our flower store.