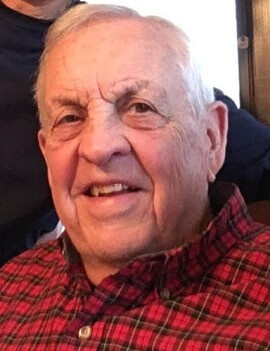 Byron “Jack” Ulrich passed on to his heavenly home on March 15th at Carle Hospital in Urbana Illinois due to complications from Covid-19.  His family was grateful to be with him as he made his transition and would like to thank the doctors and nurses of the Carle system who took such great care of Jack.

Jack was born at his parent’s home in Woodford Co, IL on February 16, 1933 to Loren and Luella Ulrich.  He was the big brother to Janice Rush (Philip) of Haviland, KS and Cathi Baer (John) of Archbold, OH.

He spent his life in Eureka, attending Price School (a one room schoolhouse) and graduating from EHS where he played football. He attended North Central College and served in the US Army Reserves as a paratrooper. Jack married Ruth Householter on September 9, 1960 and they made their home in Eureka in town, at the Knolls, at the Householter family farm for almost 40 years, on Gloria Drive and at Maple Lawn.

He was a loving husband and father, raising three girls and teaching them to have a strong faith, love the land, read and appreciate music and the arts. He supported his “girls” in all their pursuits. He celebrated their career choices, family milestones and supported them in so many ways including a cross country trip for a master’s program; the gutting & rehab of a house in Chicago and secretive fixes around the farm in Iowa.

Other family members--many nieces, nephews, cousins, aunts and uncles--were an important part of Jack’s life. Vacations often centered around family reunions and celebrations. Summers with family rotated between the homes of Jack and Ruth’s siblings and there were several multi-family adventures in a station wagon or van to Virginia and Washington DC.

Jack was a farmer before his marriage and while employed at Caterpillar, working the land that God created, He initially farmed with his Uncle Jim Ulrich and his dad before farming on his own. Jack was a tinkerer at heart and worked at jobs both big and small not quitting until each one was complete. Jack had a long career at Caterpillar and was employed there for 31 years. His time at CAT began in the apprenticeship program, operating many machines on the manufacturing side. When he retired, he was stationed at Mossville in the research and development department.

Jack was an avid cyclist, and put in many miles on trips with family, friends and the church youth group on numerous back roads and trails around the Midwest. Jack built and flew model airplanes and volunteered with numerous organizations including Mennonite Disaster Service, Camp Menno Haven, the Peoria Mission and Habitat for Humanity.

In retirement Jack and Ruth enjoyed traveling. They spent time wintering in Florida for many years. He liked the small coastal town of Cedar Key and their time in Sarasota. They also experienced Haiti, the Dominican Republic, London, Israel, Puerto Rico and Arizona. He and Ruth also would also spend time in Chicago, Iowa and Virginia where their daughters lived to help with home projects and take part in their social, family and work activities.

Jack spent his life devoted to the Lord, his family, friends and church. He led singing, participated in special music groups including an octet with his sister, Cathi, and was an MYF sponsor at Roanoke Mennonite Church, where he was a member for many years.  Later in life, he and Ruth became members of Northwood Community Church in Peoria, where he enjoyed working at Discovery Land (the children’s program). He could often be found reading books, playing games or enjoying time with the kids of Northwoods.  He also participated in the Senior Plus 55 gatherings.

Online condolences can be sent to the family at argoruestmanharris.com.

To send flowers to the family or plant a tree in memory of Byron "Jack" W. Ulrich, please visit our floral store.

To send flowers to the family in memory of Byron "Jack" Ulrich, please visit our flower store.