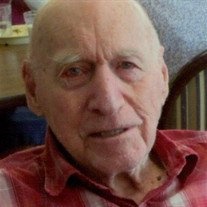 Calvin C. Hartter, 95, of Eureka, IL passed away at 4:10 p.m. on Saturday, January 11, 2020 at the Apostolic Christian Home of Eureka.
He was born December 10, 1924 in Eureka, IL to Sam and Anna Schurch Hartter. He married Rosemary S. Sharp on January 13, 1946 in Eureka, IL. She passed away on February 18, 2018.
Surviving are three daughters: Janet S. Holliger of Eureka, IL, Doris (Jess) Lionberger of Dallas City, IL, and Charlotte Liggett of Lincoln, NE; one sister: M. Jane Hartter of East Peoria, IL; two grandchildren and seven great-grandchildren.
He was preceded in death by his parents; one sister: Martha Grusy; one brother-in-law: Alf Grusy; and one son-in-law: Kenneth Liggett.
Calvin farmed, drove a school bus for Unit #140, sold Pioneer seed corn, and worked for the ASCS office in Eureka. He served on the boards of Farm Service, ASCS, and Cruger-Grainland Elevator. He was also a member of the Eureka Christian Church where he served as deacon.
Funeral services will be held Wednesday, January 15, 2020 at 7 p.m. at the Argo-Ruestman-Harris Funeral Home in Eureka. Rev. Jennie Churchman will officiate. Visitation will be from 4-6:30 p.m. at the funeral home prior to services on Wednesday. Private burial will be at Olio Township Cemetery in Eureka.
Memorials may be made to the Apostolic Christian Home of Eureka. Online condolences and tributes may be sent to the family at argoruestmanharris.com


To send flowers to the family or plant a tree in memory of Calvin C. Hartter, please visit our floral store.

To send flowers to the family in memory of Calvin Hartter, please visit our flower store.