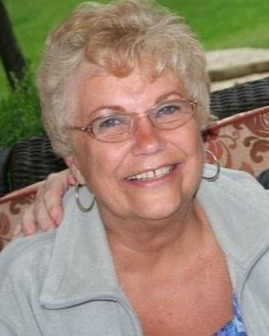 She was preceded in death by her mother, step-dad, husband, and brother-in-law.

Carol along with her husband Gary, Sr. took on many business ventures. Carol’s House of Ceramics for 15 yrs. in Washington, IL.; CJ’s Shirt Factory, where they franchised multiple locations for over 18 yrs. locally and in Florida; Dav-Gar Industries, Lacon, IL, for over 10 yrs. which included clients such as Caterpillar Corp. locally and Impact Manufacturing in Sandwich, IL; and Heartland Candies of Varna, IL. Carol later took on a clerical position for OSF Medical Center of over 15 yrs.

She enjoyed her house on Lake Wildwood in Varna IL. In her free time, Carol enjoyed travelling, listening to music, especially country & western, being on the beach surrounded by water, and she loved cooking for family & friends.

The family wishes to thank the Apostolic Christian Home of Roanoke for their kind and compassionate care, and it is their request that donations, in memory of Carol, be sent to them.

Visitation will be on Friday, October 21, 2022 from 10:00 a.m. until time of Funeral Services at 12 Noon, at the Argo-Ruestman-Harris Funeral Home in Eureka, IL. Burial will follow in procession to Swan Lake Memory Gardens Cemetery, Peoria, IL. Online condolences can be sent to family at www.argoruestmanharris.com

To send flowers to the family in memory of Carol J. Adams, please visit our flower store.

Committal Services at the grave site- Please dress for the weather.