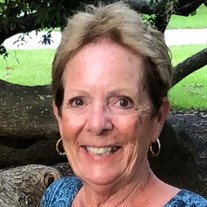 Catharine L. "Cathy" Rossman, 72, of Eureka, passed away at 4:05 p.m., Monday, June 22, 2020, at Illinois Cancer Care in Peoria. She had been waging a hard-fought and courageous battle against cancer. Cathy is a beloved wife, mother, grandmother, sister, aunt, and a friend to so many.

Born on October 13, 1947, in Hershey, PA, to Robert and Betty (Clark) Steck, Cathy married Robert "Bob" Rossman on January 14, 1967, in East Dundee, IL. They began their life together in Elgin, IL, where she worked for an orthodontist as a hygienist. When Bob joined the Army in June 1968, Cathy moved back to PA, briefly while he finished training. She joined him at Fort Benning, GA. From there, they traveled across the United States for eight years and started their family.

They settled in Eureka, IL, in 1978. By that time, Cathy dedicated herself to her family, raising three children, Shannon, Kelli and Sean. When her children were older, she went back to work, serving as an alcohol and abuse counselor for many years in various local hospitals, including the Tazwood Center and Hopedale Hospital, and the school district. When she left that career path, her passion became watching and raising kids for more than 25 years through a daycare service she provided to area children. These children and their families became her extended family, and she cherished watching them grow up and reveled in their milestones.

She was extremely proud of her children and their accomplishments and whole-heartedly took on the role of grandma. She enjoyed spending quiet time with them when they were little and watched them follow their passions, which included playing baseball, basketball, softball, swimming, dancing, participating in gymnastics, playing instruments, and marching in the flag corp.

Always a voracious reader, Cathy especially turned to books in the past year and half. She was known to check out a handful of books at each library visit. Books became her sanctuary.

Cathy's wishes were for no funeral or memorial service. Cremation will be accorded. Argo-Ruestman-Harris Funeral Home in Eureka is assisting the family with arrangements. In lieu of flowers, memorials may be made to the Susan G. Komen Breast Center in Peoria (8600 IL-91, Peoria, IL 61615) or Eureka Public Library (202 S Main St, Eureka, IL 61530)

To send flowers to the family or plant a tree in memory of Cathy L. Rossman, please visit our floral store.

Please click here to view the video tribute
To send flowers to the family in memory of Cathy Rossman, please visit our flower store.