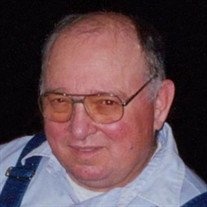 Charles B. Ludwig, 77, of Secor, IL passed away at 3:45 p.m. on Friday, September 11, 2020 at OSF St. Joseph Medical Center in Bloomington.
He was born on December 27, 1942 in Goodfield, IL a son of Alfred and Gladys Blain Ludwig.
Survivors include one son, Alan (Melanie) Ludwig of Benson; one brother, Kenny (Colette) Ludwig of Eureka; one sister, Sally Ludwig of Eureka; four grandchildren, Heather (Warren) Blunier of Eureka; Brittany Ludwig of Benson; Barrett Ludwig of Eureka; Cody Wagner of Champaign; six great grandchildren; special friend, Kathy Hudson of Secor.
He was preceded in death by his parents and one son, Chris Ludwig.
Charles worked at Caterpillar as a mechanic for 30 years.
Charles proudly served his country in the United States Navy during the Vietnam War.
He won the Golden Glove Boxing championship in 1959.
He was a member of American Legion Post 466 in Eureka, Eureka Saddle Club, Secor Sportsman's Club, UAW Local #974 in East Peoria. He was also the Palestine Township Road Commissioner.
Graveside services will be held at 11:00 a.m. on Thursday, September 17, 2020 at Olio Township Cemetery in Eureka, where military rites will be accorded at the grave. Reverend Jennie Churchman will officiate. Visitation will be held from 5-7 p.m. on Wednesday September 16, 2020 at Argo-Ruestman-Harris Funeral Home in Eureka and also one hour prior to graveside services at Olio Township Cemetery in Eureka. Social distancing guidelines will be observed during the visitation.
Memorial contributions may be made to the family. Online condolences may be sent to the family at www.argoruestmanharris.com.


To send flowers to the family or plant a tree in memory of Charles B. Ludwig, please visit our floral store.

Please click here to view the video tribute
To send flowers to the family in memory of Charles Ludwig, please visit our flower store.