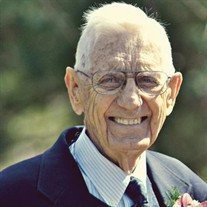 Eureka- Clifford Eugene Auth, 90, beloved husband and father, passed away at 3:00 am at his home after a very full life of almost 91 years on August 25, 2014. He was born September 13, 1923 in Bluegrass, Illinois to Frank Joseph and Margaret Gladys Judy Auth. He was known as Gene to the family and friends he grew up with and all their children but everyone else called him Cliff.

Cliff served in the Army Air Corp weather service during World War II. He helped the aviators defend against German submarine attacks in the Caribbean. After the war he moved to Joliet, Illinois where he worked for Caterpillar Tractor Company as a processing engineer. He met his future wife Phyllis Joan "Bonnie" Malone in a dance class. They were married June 29, 1958 and raised two sons, Phillip and Timothy in New Lenox, Illinois. They were avid campers and traveled extensively around the United States. He retired from Caterpillar after 30 years in 1983. After Cliff's retirement, he discovered that he was an artist and enjoyed painting. Cliff and Bonnie became "snowbirds" and eventually settled in Harlingen, Texas where they were active in square dancing and Cliff joined the local Art Guild. Bonnie died in 2002 and Cliff discovered that lightening can strike twice when he fell in love again and married Reta Mae Babione in Harlingen, Texas on October 7, 2004. Cliff and Reta moved to Illinois in 2009 to be near his family.

Cliff is survived by his second wife Reta of Eureka; sons, Phillip of Austin, Texas and Timothy (Kari) of Washington, Illinois; sisters Francis (Delbert) Remole of Potomac, Illinois and Joanne Boyd of Danville, Illinois; his grandchildren Danielle (Matt) Colgan, Nicolas Auth & Rachel Auth; one great grandson, Atlas Colgan and numerous nieces and nephews. He was loved and will be missed by all.

He was preceded in death by his parents, his first wife Bonnie, and his brother Maurice.

According to his wishes, he will be cremated and a visitation will be held at University United Methodist Church, 2818 N. University Street, Peoria, Illinois on Saturday, August 30th at 9:30am with a memorial service immediately following at 10:30 am. A private inurnment will be at the Abraham Lincoln National Cemetery at a later date. Argo-Ruestman-Harris Funeral Home in Eureka is assisting the family with their arrangements.

Should those who knew him desire, donations can be made to the Methodist Medical Center Hospice Services or their favorite charity in his name. Online condolences may be sent to the family at www.argoruestmanharris.com.


To send flowers to the family or plant a tree in memory of Clifford Eugene Auth, please visit our floral store.

To send flowers to the family in memory of Clifford Auth, please visit our flower store.