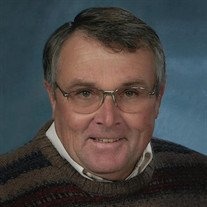 Dennis worked for the U.S. Post Office as a mail man in Eureka for 35 years. After retirement, he was a bus driver for the Eureka School District. Dennis made a positive impact on the Eureka community which he was a part of his entire life. He served as a longtime city alderman. He was a former softball coach and umpired both softball and baseball for several years. Dennis was an avid reader and Civil War enthusiast.

A private family memorial mass will be held at St. Luke's Catholic Church in Eureka. Father Eugene Radosevich will officiate. A Celebration of Life for both Denny and Ann will be held at a later date. Argo-Ruestman-Harris Funeral Home in Eureka is handling arrangements for the family.

Memorial contributions may be made to St. Luke's Catholic Church or Children's Hospital of Illinois Foundation.

Online condolences and tributes may be sent to the family at www.argoruestmanharris.com.

To send flowers to the family or plant a tree in memory of Dennis Glenn Garey, please visit our floral store.

To send flowers to the family in memory of Dennis Garey, please visit our flower store.