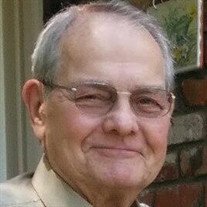 He was preceded in death by his parents, his sister, Joan Gullo, and brother, Michael J. Barber.

He entered the United States Army on November 28, 1956. He was stationed in Germany and was honorably discharged on November 20, 1959 with the rank SP4. He sang in an Army chorus and played intramural football and basketball.

He was employed at International Paper Company in Peoria for thirty-three and a half years, retiring as Maintenance Supervisor.

His time was spent with his family and friends, enjoying Cardinal games, Green Bay Packer games, classic car shows, eagle watching, genealogy, gardening and making bread.
He was a member of the International Quarterly Club, Izaak Walton League of America and an associate member of the Illinois Retired Teachers Association.

Memorial contributions may be made to The American Legion, Catholic Charities or charities of the donor's choice. Online condolences may be sent to the family at www.argoruestmanharris.com.


To send flowers to the family or plant a tree in memory of Donald E. Barber, please visit our floral store.

Please click here to view the video tribute
To send flowers to the family in memory of Donald Barber, please visit our flower store.