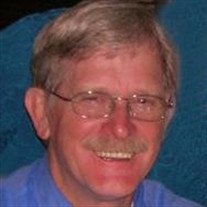 Eureka-Don Hutson, 72, of Eureka, IL completed his life's journey at 10:13 am on Thursday, August 25, 2016 at home surrounded by his family. He had been recently diagnosed with esophageal cancer.

He was preceded in death by his parents, one brother Gary Hutson, and one sister Joyce Cullum.

Don graduated from Washington High School in 1963 and volunteered for the US Army. He served in the 58th Combat Engineer Company in Fulda, Germany during the Berlin Conflict. He worked as a Caterpillar Heat Treat Operator for 30 years, retiring in 1998. He also worked part time for 10 years at Eureka Lake Park using his weed eater and hand mower artistry to enhance the beauty of the park for its many users.

Don was known to many for his love of running and he completed 66 marathons. (26.2 miles distance) He was a father figure to many in the family and extended families.

A celebration of life service will be held at 3:00 pm on Sunday, August 28, 2016 at Maple Lawn Memorial Hall in Eureka. Pastor Dwight Winnett will officiate. Visitation will be held from 1-3 on Sunday at Memorial Hall before the service. Cremation rites have been accorded. Argo-Ruestman-Harris Funeral Home in Eureka is handling the arrangements for the family.

Memorials may be made to the Eureka Christian Church with notation in the memo to Snackpac.
Online condolences may be sent to the family at www.argoruestmanharris.com.

To send flowers to the family or plant a tree in memory of Donald Hutson, please visit our floral store.

Please click here to view the video tribute
To send flowers to the family in memory of Donald Hutson, please visit our flower store.