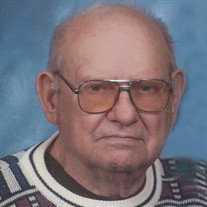 He was preceded in death by his parents, one sister, two brothers, his step-mother Ruth King, and one niece, Cheryl King.

Donald served his country during the Korean and Vietnam Wars. He was in the Army for 21 years serving as a Chief Warrant Officer 2. He retired on August 28, 1969. He also worked in the Peoria Post Office for 20 years as a plant manager. He retired in 1992.

Funeral services will be held at 11 a.m. on Tuesday, March 24, 2015 at the Argo-Ruestman-Harris Funeral Home in Eureka. Pastor Keith Thibo will officiate. Visitation will be held on Monday evening at the funeral home from 5-8 pm and also one hour before services on Tuesday at the funeral home. Burial will be in Olio Township Cemetery with full military rites at the grave.

Memorials may be made to Heartcare Midwest in Peoria. Online tributes and condolences may be made at www.argoruestmanharris.com.


To send flowers to the family or plant a tree in memory of Donald L. King, please visit our floral store.

Please click here to view the video tribute
To send flowers to the family in memory of Donald King, please visit our flower store.