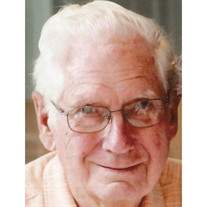 Gene moved North to Peoria, at about age 17 with his brother to work at Caterpillar Tractor Co. with a suitcase of comic books and a white shirt, ready to face the world! He was a graduate of the CAT apprentice course, served in the Air National Guard and was a member of the Eureka Sportsmans Club.
After retiring from CAT, he worked at Wittmer Appliance in Eureka and was a courier for Citizens Savings Bank and Eureka Community Bank.

Gene and Caroll loved their winter trips to Tucson, AZ in their trailer and Gene loved tinkering to make improvements. He enjoyed woodworking and spending time in his workshop helping his grandson with 4H projects and building tables and useful items for his children. He learned the craft of woodcarving and his children and grandchildren each have a piece or two of his work. Animals and Biblical sayings were his favorite subjects. He loved his grandchildren and great grand children and they all remember being read the "funnies" on his lap, his puns and jokes. ...he will be missed. "See ya later, alligator"

Gene was a member of the Eureka Apostolic Christian Church where funeral services will be held at 10:00 a.m. on Wednesday, August 15, 2018. Church ministers will officiate. Visitation will be held from 4-7 p.m. on Tuesday, August 14, 2018 at the Argo-Ruestman-Harris Funeral Home in Eureka and also from 9-9:45 a.m. on Wednesday prior to services at the church. Burial will be in the Roanoke Apostolic Christian Cemetery. Argo-Ruestman-Harris Funeral Home is Eureka is handling arrangements for the family.

To send flowers to the family or plant a tree in memory of Earl "Gene" Zobrist, please visit our floral store.

Please click here to view the video tribute
To send flowers to the family in memory of Earl Zobrist, please visit our flower store.