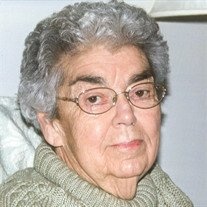 Edith graduated from (ISNU) Illinois State Normal University in 1947 with a bachelor's degree in business education. She used that education to teach at Eureka High School from 1968 to 1979. She also did bookkeeping work for her husband at Dickey's State Farm Insurance Agency. She was a member of Eureka Christian Church and its Golden Circle Class for over 60 years. She was also a member of AAUW (American Association of University Women), CWF (Christian Women Foundation), and 20th Century Book Club.

Funeral services will be held at 11 a.m., Monday, July 11, 2016 at Argo-Ruestman-Harris Funeral Home in Eureka. Pastor Lucy Maier will officiate. Visitation will be one hour prior to services at the funeral home. Burial will be in Olio Township Cemetery.

Memorials may be made to Eureka Christian Church or JDRF (Juvenile Diabetes Research Foundation.)


To send flowers to the family or plant a tree in memory of Edith Dickey, please visit our floral store.

To send flowers to the family in memory of Edith Dickey, please visit our flower store.