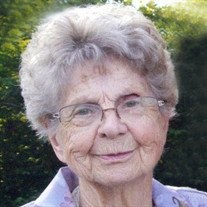 She was born Elizabeth Johnson on May 1st, 1924 in Chicago, IL. Surviving are two sons Timothy E. (Janet) of Freehold, NJ; Thomas W. (Cheryl) of Alpharetta, GA; and Judith A. (Randy) Schertz of Eureka. In addition are 10 grandchildren and 12 great grandchildren.

She was preceded in death by her parents, husband, and one brother.

She was raised by her Aunt Gertrude and after high school worked at Teletype corporation where she met her husband Eugene who was six years older. She told him to go home to his wife and kids. He persisted and they were married a year later on June 19, 1943 in Chicago and moved back to Eureka four years after that when their son Tim was two.

She worked for many of the local businesses as a bookkeeper during the school year (Mangold Ford, City Water Department, School System, Merle Graham, Wes Wenger and as Housing Director for HUD) and would take the summers off to supervise the kids then look for another job when they went back to school.

Betty was an inspiration to her family with her many talents: cooking, gardening, canning, sewing, and knitting. Her children and grandchildren cherish the many hand made baby blankets and quilts, her generosity, and her willingness to lend a helping hand. She was a devoted wife and mother, working side by side with her husband including building their house in Edgewood where she lived for 55 years.

Betty was a member of the Eureka Presbyterian Church where memorial services will be held at 4:00 pm on Tuesday, March 29, 2016. Rev. Paul Walles will officiate. Visitation will be held from 2:30-4 pm at the church before the service. Inurnment will be in Olio Township Cemetery at a later date.

Memorials may be made to the Eureka Presbyterian Church. Online condolences may be sent to the family at www.argoruestmanharris.com.

To send flowers to the family or plant a tree in memory of Elizabeth "Betty" Sharpe, please visit our floral store.

Please click here to view the video tribute
To send flowers to the family in memory of Elizabeth Sharpe, please visit our flower store.