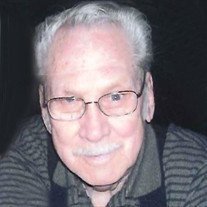 He is survived by one daughter, Joan Jording; a granddaughter Candice Cecil; a great -granddaughter Danielle Cecil all of Eureka; one brother Richard Jording of Secor; and one sister Sandra (Jerry) Amigoni of Eureka.

He was preceded in death by his parents, one sister Pamela Jording; and two brothers Charles and Roger Jording.

Eugene served in the Air Force from 1952-1956. He retired from Caterpillar in 1986 after 36 years of service. After he retired he enjoyed life until his tenure was ended.

Funeral services will be held at 10 a.m. Monday, November 24, 2014 at Our Redeemer Lutheran Church in Eureka. Pastor Joe Burns will officiate. There will be no visitation. Burial will be in Olio Cemetery.

Memorial contributions may be made to a charity of the donor's choice. Online tributes and condolences may be made at www.argoruestmanharrisfuneralhome.com.

To send flowers to the family or plant a tree in memory of Eugene Jording, please visit our floral store.

To send flowers to the family in memory of Eugene Jording, please visit our flower store.