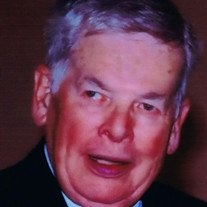 George W. Eiermann 86, of Eureka, IL formerly of Germantown Hills, passed away on Tuesday November 13, 2018 at his residence. He was born on January 23, 1932 in Peoria, IL the son of Henry and Dorothy (Wallace) Eiermann. He married Diane Elliott on July 1, 1956 in Toulon, IL. She survives.
He is survived by 2 daughters Jean (Terry) Wilmarth of Germantown Hills, IL; Susan Berg of Oscoda, MI; 2 sisters Susanne Burrows of TN; Janet Quine of TN; 4 grandchildren Meg, Laura (Ross), Ashley, Allison; 4 great-grandchildren and 2 cousins Ronald Wallace of Toulon, IL; Marian Lien of Peoria, IL.
He was preceded in death by his parents.
George proudly served his country in the U.S. Army during the Korean War. Following the military he started training with Caterpillar and later owned and operated Monarch Tool & Die Manufacturing in East Peoria, IL. He was a charter member of the Metamora / Germantown Hills Rotary Club and also the Germantown Hills Education Foundation. He was a member of the Orpheus Men's Choir for 43 years.
Cremation rites have been accorded with Argo-Ruestman-Harris Funeral Home. A memorial service will be held on November 17, 2018 at the Eureka Christian Church. Service will start at 11am Rev. Jennie Fisher will officiate.
Memorial contributions may be made to the Eureka Christian Church or the Eureka Hospital. Online tributes and condolences may be made at argoruestmanharris.com


To send flowers to the family or plant a tree in memory of George W Eiermann, please visit our floral store.

To send flowers to the family in memory of George Eiermann, please visit our flower store.