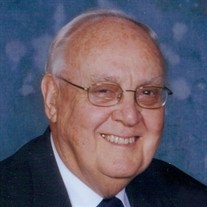 Gilbert A. Hasenyager, 89, of Eureka, IL, passed away surrounded by his family, at 6:15 p.m. on Saturday, November 16, 2019 at the Apostolic Christian Home of Eureka.
Gilbert was born on August 5, 1930 in Princeton, IL a son of Alvin and Minnie Otto Hasenyager. He spent his growing up years on a farm near Walnut, IL. He married Beverly Argo on September 18, 1954 in Eureka. She passed away on November 17, 1999. Later he married Lana Cheney on December 14, 2002 in Eureka. She survives.
Survivors also include two step-children, Lisa(Steve) Bennett of Naperville; Angela Cheney of Washington; 7 step-grandchildren; 3 step-great-grandchildren, that added much pleasure to his life. Sister-in-law Sharon(Pete) Hanner of Eureka; brother-in-law, Barney Argo of Danvers; and numerous nieces and nephews.
He was preceded in death by his parents, two brothers, Clarence and Herb, and sister-in-law Carolyn Argo.
Gilbert attended Eureka College. He graduated from Worsham College of Mortuary Science in 1955.
He co-owned the Otto-Argo Funeral Home, where he was a funeral director for 40 years in Eureka, Danvers and Carlock.
Gilbert joined the Eureka Christian Church in 1954 and has remained an active member in his church for the last 65 years. He served on the church board and also as board president.
He served on the Eureka Public Library board for 20 years and on the Eureka City Council for 8 years. He was a Paul Harris fellow during his membership on Eureka Rotary Club, hosting many students through Rotary exchange.
He loved fishing, hunting, gardening and was an honorary member of the Eureka Sportsman Club.
Memorial services will be held at 2 p.m. on Saturday, November 30, 2019 at Eureka Christian Church. Rev. Jennie Churchman will officiate. Visitation will be held from 1-2p.m. prior to the services. A reception will follow in the church Parish Hall. Cremation will be accorded. Private family burial will be held at a later date at Park Lawn Cemetery in Danvers. Argo-Ruestman-Harris Funeral Home in Eureka is handling arrangements for the family.
Memorial contributions may be made to the Eureka Christian Church, Eureka College or Eureka Public Library. Online condolences may be sent to the family at argoruestmanharris.com.


To send flowers to the family or plant a tree in memory of Gilbert A. Hasenyager, please visit our floral store.

To send flowers to the family in memory of Gilbert Hasenyager, please visit our flower store.