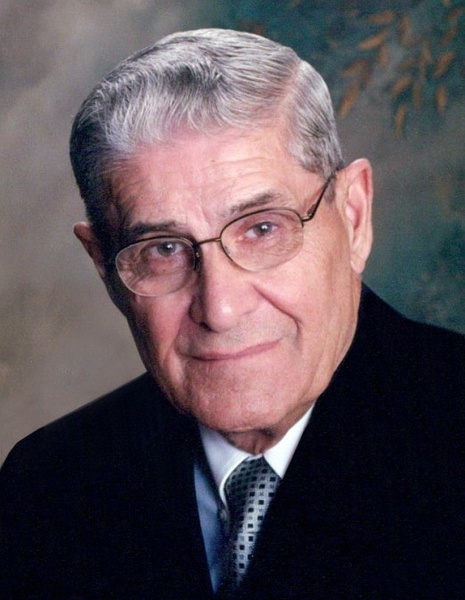 Gilbert D. Wilson, Sr., 93, of Eureka, IL passed away at 3:30 a.m. on Thursday, February 10, 2022 at the Apostolic Christian Home of Eureka.
He was born on November 22, 1928 in Hamilton County, IL a son of Carl and Bernetha Baker Wilson. He married Shirley A. Esposito on February 14, 1952 in Eureka. She survives.
Survivors also include a daughter, Christina (Ron) Schmidgall of Eureka; son, Dean (Diana L.) Wilson of Hanna City, IL; daughter, Andrea (Late Mark) Scott of Eureka; two sisters, Donna Smith of Bloomington, IL; Hilda Parsons of Eureka, IL; one brother, Jerry Wilson of Surprise, AZ; five grandchildren, Gloria Fitzgerald, Jarrod Wenger, Jason Wilson, Alyssa Rocke, Derek Scott; nine great grandchildren; many nieces and nephews whom he loved.
He was preceded in death by his parents.
Gilbert worked for 38 years at Caterpillar as a supervisor retiring on December 1, 1983. After retirement he worked part time at Mangolds in Eureka for 30 years.
He loved sports and was a lifelong fan of the Chicago White Sox and Chicago Bears. He enjoyed feeding and watching the birds, especially the hummingbirds and Baltimore Orioles.
He proudly served his country in the U.S. Air Force.
Funeral services will be held on Monday, February 14, 2022 at 11:00 a.m.  at the Eureka United Methodist Church. Rev. Paul Wier will officiate.
Visitation will be held one hour prior to services at the church on Monday. Burial will be in the Olio Township Cemetery in Eureka where military rites will be accorded at the grave. Argo-Ruestman-Harris Funeral Home in Eureka is handling arrangements for the family. Lunch will follow the graveside services at Eureka United Methodist Church.
Memorial contributions may be made to the St. Jude Midwest Affiliate or Plant a Tree in Honor of Gilbert. Online condolences may be sent to the family at argoruestmanharris.com

To send flowers to the family or plant a tree in memory of Gilbert D. Wilson, Sr., please visit our floral store.

To send flowers to the family in memory of Gilbert Wilson, Sr., please visit our flower store.