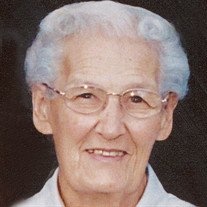 Eureka-Gladys V. Schmidgall, 90, of Eureka, IL passed away peacefully surrounded by her family at 9:45 a.m. on Sunday, June 12, 2016 at the Eureka Apostolic Christian Home.

She was preceded in death by her parents, three brothers and six sisters.

Gladys was a homemaker and in past years worked at the Eureka Apostolic Christian Home in the kitchen.

She was a loving wife and mother. She was an avid gardener and enjoyed working in her flower beds. Everyone enjoyed her good cooking, pies, baked goods and Christmas time peanut brittle. She also enjoyed having Quilting Bee's at her home with her cousins and friends.

She was a member of the Eureka Apostolic Christian Church where funeral services will be held at 10:00 a.m. on Thursday June 16, 2016. Church ministers will officiate. Visitation will be held on Wednesday June 15, 2016 from 4-7 p.m. at the Argo- Ruestman-Harris Funeral Home in Eureka and also from 9-9:45 a.m. on Thursday at the church before services. Burial will be in the Roanoke Apostolic Christian Cemetery.

Memorials may be directed to the Eureka Apostolic Christian Home. Online condolences may be sent to the family at www.argoruestmanharris.com.


To send flowers to the family or plant a tree in memory of Gladys V. Schmidgall, please visit our floral store.

To send flowers to the family in memory of Gladys Schmidgall, please visit our flower store.