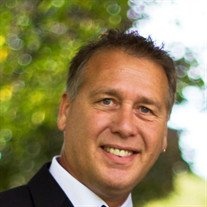 Eureka - Harlen Burdette Pierson, 55, of Eureka, Illinois passed away peacefully at 4:30 am Sunday, May 22nd, 2016 at his home following a year long battle with brain cancer. He was born April 24, 1961 in Princeton, Illinois, the son of Harold and Arlene Schertz Pierson. He married Patricia "Patty" Weidner on November 17, 1984 in Eureka. She survives.

He was preceded in death by his parents and his father-in-law, Thomas Weidner.

Harlen attended Eureka High School in the class of 1979. He was a licensed home inspector, owning Dream Home Inspection Services from 2004 until his illness started in May of last year. His alter ego, Rollo the Clown, was a source of joy for adults and children throughout central Illinois and around the world, performing in India in 2010. He entertained in the Eureka Fourth of July parade for 24 years. He also served the community for three years as a District 140 school bus driver. From 1979-1985 he served in the Air National Guard.

He loved spending time with his family and friends and enjoyed making people laugh. He especially loved riding his Harley motorcycle. He will be greatly missed.

Funeral services will be held at 11am on Thursday May 26, at Crosspoint Community Church in Eureka. Pastor Dave Steinbeck will officiate. Visitation will be held on Wednesday from 4-7pm at Argo-Ruestman-Harris Funeral Home in Eureka and from 10-11 am on Thursday prior to the services at the church. Burial with military rites will be at Olio Township Cemetery in Eureka.

Memorial Contributions may be made to American Cancer Society Relay for Life, St. Jude Children's Hospital, or Crosspoint Community Church. Online condolences may be sent to the family at argoruestmanharris.com.


To send flowers to the family or plant a tree in memory of Harlen Pierson, please visit our floral store.

Please click here to view the video tribute
To send flowers to the family in memory of Harlen Pierson, please visit our flower store.