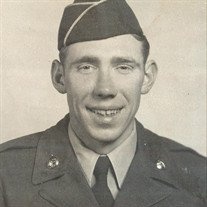 Eureka-Harry E. Page 88, of Eureka, Il passed away at 11:33pm on Thursday, November 02, 2017 at the Richard L. Owens Hospice home in Peoria, IL.
He was born on January 02, 1929 in Pontiac, IL to Charles Harrison and Blanch H. (Wood) Page. He married Iris J. Stringer in June of 1991 in Pontiac, IL. She preceded him in death on December 03, 2005.
Survivors include two sons Thomas (Shaneka Lucier) Page of Peoria, IL; Michael (Marla) Page of Bloomington, IL: one daughter Diane (Glen) Bailey of Chatsworth, IL; eight grandchildren including Amanda, Ashley, Tennille, Jennifer and Kevin; and one great grandchild.
Harry served in the U.S. Army for over 20 years obtaining the rank of Master Sargent and was a member of the Eureka American Legion Post #466. Harry later worked at the Pontiac Correctional Facility and also served as the Chief of Police in Fairbury, IL.
Memorials may be made to the American Legion Post #466 or the Richard L. Owens Hospice Home.
There will be visitation from 5pm to 7pm at Argo-Ruestman-Harris Funeral Home in Eureka, IL on Tuesday November 07, 2017. Funeral services will be at 11am Wednesday November 08, 2017 with burial at Spring Bay Cemetery following the service. Argo-Ruestman-Harris Funeral home is assisting the family with the funeral arrangements. Online tributes and condolences may be made at www.argoruestmanharris.com.


To send flowers to the family or plant a tree in memory of Harry E Page, please visit our floral store.

Please click here to view the video tribute
To send flowers to the family in memory of Harry Page, please visit our flower store.