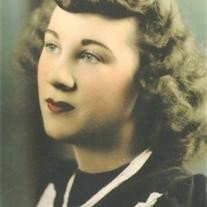 Irma was born April 20, 1925 in
Buckley, IL a daughter of John and Frieda Kottke Rust. She
graduated from Buckley High School and then moved to Bloomington
where she was employed by State Farm Insurance Company. She married
Oscar Laesch on September 3, 1944 in Bloomington. He passed away on
May 14, 1995.

Irma was a homemaker and retired
dairy farmer. She and Oscar were charter members of Christ Lutheran
Church. She was a 50 year member of the Eastsider's Home Extension
where she held many offices. She was a member of the State and
National Association of Wheat Weavers where she shared her skills
to teach others this nearly lost craft. She was a member of the
Prime Timers of McLean Co. and a Farm Bureau member. Irma served as
an election judge for Old Town Township and was active in the 4_H
fair participating in The Young at Heart program. Through her
membership in the Ladies Guild at Christ Lutheran she participated
in many charitable endeavors such as making quilts for World
Relief. She was an expert vegetable and flower gardener, talented
seamstress and baker. She gave 110 percent to those things she was
passionate about.

Irma grew up on a farm in Buckley,
IL. During her adult life she and Oscar lived and worked on their
dairy farm. Irma exhibited a work ethic throughout her life that
was unsurpassed. She retired, moving to town in 1986. Irma held a
strong commitment to her family and she adored her children,
grandchildren, and great grandchildren.

Left to treasure her memory are her
precious daughters, Donna LaMar and Bev Hornickel (Jim) and her
cherished sons Terry (Marcia) and Michael (Connie) all of
Bloomington_Normal. She was preceded in death by her son,
Roger.

In addition to her husband, Oscar
and son, Roger she was preceded in death by two brothers: Harold
Rust and Merle Rust.

Irma came a long way from being the
little girl from the farm in Buckley. She was admired as an
exceptional person by those who knew her and she set an example
that we can continue to aspire to.

Online condolences may be sent to
the family at kiblerbradyruestman.com.

To send flowers to the family or plant a tree in memory of Irma K. Laesch, please visit our floral store.

To send flowers to the family in memory of Irma K. Laesch, please visit our flower store.