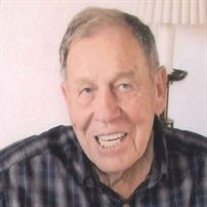 Jack K. Jones
Congerville- Jack K. Jones, 83, of Congerville, IL passed away at 10:23 am on Friday, June 6, 2014 at Advocate Eureka Hospital.
He was born on February 2, 1931 in Seymour, IL a son of Lonie and Doris McNeill Jones. He married Doris E. Conn on January 30, 1955 in Onarga, IL. She passed away on April 15, 2012.
Surviving are two sons, Dr. Steven (Patty) Jones of Eureka, IL; Thomas (Gale) Jones of Findlay, OH; two daughters, Susan (Dennis) Minton of North Pekin, IL; Deborah Clark of Champaign, IL; two brothers, Richard Jones of Rantoul, IL; Joe Jones of Lincoln, IL; fourteen grandchildren, and five great-grandchildren.
He was preceded in death by his parents, one sister Joyce Lamkin, and three brothers John, Paul, and Don Jones.
An Army veteran, he served his country during the Korean War.
Jack had worked for Springfield Radiology and Sangamo Electric in Springfield, IL in the accounting department.
He was a member of the Eureka Christian Church where memorial services will be held at 11:00 am on Saturday, June 14, 2014. Rev. Carol Bennett-Barker will officiate. Visitation will be held on Friday evening from 5-7 pm at the Argo-Ruestman-Harris Funeral Home in Eureka. Graveside inurnment will be held at 12:30 pm on Sunday, June 15, 2014 at the Del Rey Cemetery in Onarga, IL.
Memorial contributions may be made to Eureka Christian Church, Heart House in Eureka, or a charity of the donor's choice. Online condolences may be sent to the family at www.argoruestmanharris.com.

To send flowers to the family or plant a tree in memory of Jack K. Jones, please visit our floral store.

To send flowers to the family in memory of Jack Jones, please visit our flower store.