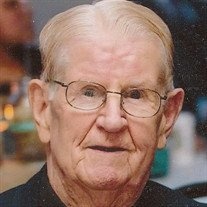 James was preceded in death by both parents, three brothers, one sister, and one granddaughter.

James served in the U.S. Army in the Infantry / Signal Corp at Fort Sheridan and also served in Japan during the occupation following WWII and was a member of the Eureka American Legion Post #466. James later worked at Klaus Radio in Peoria, IL for 45 years retiring in 1993 as the parts manager. He was a founding member of the Eureka Jaycees in Eureka and served as Vice President for the State of Illinois Jaycees. He was also a founding member of the Eureka Lions Club. He served as Eureka mayor for many years.
He was also responsible for starting the fourth of July celebration at Eureka Lake and was a major contributor to the building of the pavilion at Eureka Lake. He also provided and set up the Christmas music in the tower at the court house and ran the sound system for the Memorial Day celebration.

Memorials may be made to Heart House or the charity of the donor's choice.

There will be no services or visitation. Cremation has been accorded. Argo-Ruestman-Harris Funeral home is assisting the family with the funeral arrangements. Online tributes and condolences may be made at www.argoruestmanharris.com.

To send flowers to the family or plant a tree in memory of James Klaus, please visit our floral store.

To send flowers to the family in memory of James Klaus, please visit our flower store.