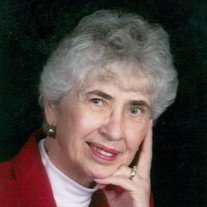 She was born on November 10, 1932 in Pontiac, IL a daughter of Eli and Florence Schott Casson. She married Phillip C. Kenney on December 21, 1951 in Pontiac. He survives.

She was preceded in death by her parents and one brother, Dale Casson.

Jeanne graduated from Chenoa High School. She had worked for Woodford County Service Company during the late 50's and early 60's as a bookkeeper.

Jeanne loved flowers and gardening. Her greatest joy was spending time with her family. She was dearly loved and will be missed by all who knew her.

A memorial service will be held at 11:00 am on Friday, January 20, 2017 at Eureka United Methodist Church. Rev. Paul Wier will officiate. There will be no visitation. Cremation rites will be accorded and inurnment will be in Olio Township Cemetery at a later date. Argo-Ruestman-Harris Funeral Home in Eureka is assisting the family with arrangements.

In lieu of flowers, memorials may be given to the Eureka United Methodist Church or a charity of the donor's choice. Online condolences may be sent to www.argoruestmanharris.com.

To send flowers to the family or plant a tree in memory of Jeanne Kenney, please visit our floral store.

To send flowers to the family in memory of Jeanne Kenney, please visit our flower store.