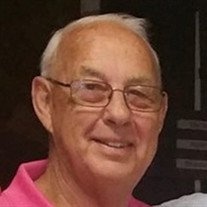 Jerry Dale Sides, 74, of Eureka, IL passed away at 8:45 p.m. on Saturday, June 8, 2019 at his home, surrounded by his wife and children.
He was born on November 10, 1944 in Athens, Alabama, a son of Edgar and Mary Smith Sides. He married Mary "Penny" Landgraf on August 31, 1968 in Normal, IL. She survives.
Survivors also include daughter, Michelle (Barry) Hoogerwerf of Arlington, TX; son, Ryan (Rachel) Sides of Congerville; daughter, Mandy Sides of Arlington, TX; son, Alex Sides of Pensacola, FL; four sisters, Sarah Cornelle Gerber of Eureka; Will Ann (Freda) Melaik of Peoria; Della (Ray) Prince of Bloomington; Ginger (Gary) Springer of Eureka; four grandchildren, Cade Hoogerwerf, Avery Hoogerwerf, Jackson Sides, Payton Sides; and many loving nieces and nephews.
He was preceded in death by his parents, 5 sisters and 3 brothers.
Jerry worked at Caterpillar in Morton for 39 years as a Purchasing Analyst and Ground Engaging Tools Specialist.
Jerry owned and operated Cavalcade Farms in rural Eureka. Jerry raised Polled Hereford and Purebred Angus Cattle. He enjoyed showing cattle at County and State Fairs across the United States with family and friends. Jerry was an influential leader in the cattle community, sharing his knowledge, love and passion with others.
He was a member of the Eureka American Legion Post 0466 and the American Angus Association.
Jerry was an original board member who started the Eureka JFL and Eureka Youth Wrestling Programs.
He was incredibly proud of his children and grandchildren. He followed their sport activities all over the United States. The stands will not be the same without him as he was their #1 fan. He also enjoyed cheering on the Chicago Bears and St. Louis Cardinals.
Celebration of Life will be held on Saturday, June 15, 2019. There will be a visitation from 3-6pm with a sharing of memories beginning at 4:30pm at the Congerville Village Hall (300 E Lincoln Street).
In lieu of flowers, memorials may be made to PanCan, DFW 2019 Purple Stride/Jogging for Jerry using the link: http://support.pancan.org/site/TR?fr_id=1813&pg=team&team_id=21209. The family will be running in his honor on November 9th in Dallas. Pancreatic Cancer Action Network (PanCAN) is dedicated to finding a cure for pancreatic cancer. Checks can also be made out to PanCan with DFW 2019 Purple Stride/Jogging for Jerry in the memo and mailed to PanCan Los Angeles Office, 1500 Rosecrans Ave, Suite 200, Manhattan Beach, CA 90266
Argo-Ruestman-Harris Funeral Home in Eureka is handling arrangements. Online condolences may be sent to the family at www.argoruestmanharris.com.


To send flowers to the family or plant a tree in memory of Jerry Dale Sides, please visit our floral store.

To send flowers to the family in memory of Jerry Sides, please visit our flower store.