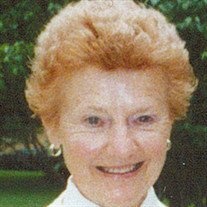 She was preceded in death by her parents, one brother, Jack Bechtel and son-in-law Jim Harper.

Joanne worked as a secretary at Libby's in Eureka. She was also the co-owner and bookkeeper for Bernard Krumholz Trucking for many years until she retired with Bernie in 2010.

She enjoyed spending her spare time working in her garden and yard. She loved her grandchildren and great grandchildren with all her heart.

Joanne was an active member of St Luke's Catholic Church in Eureka and was in the Ladies Guild at the church. She was also a member of the 4G in Eureka.

In lieu of flowers, memorial contributions may be made to St. Luke's Catholic Church- Ladies Guild or Eureka Apostolic Christian Home. Online condolences may be sent to the family at www.argoruestmanharris.com.

To send flowers to the family or plant a tree in memory of Joanne Bechtel Krumholz, please visit our floral store.

To send flowers to the family in memory of Joanne Krumholz, please visit our flower store.