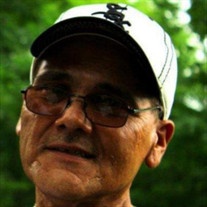 John F. Galindo Sr 59, of Eureka, formerly of Chicago passed away on April 7, 2019. He was born on June 4, 1959 in Chicago, IL to Miguel Angel Galindo and Rosario Rodella.
John is survived by his fiancé: Tammy S. Labombard of Eureka; 1 daughter: Audreyrose (Zachery Rodriguez) Galindo of Eureka, 2 sons: John F. Galindo Jr of Eureka, Anthony Angel Galindo of Evansville, IN; 1 grandson Joesph Elven Jr. and 1 brother: Marcelino (Deana) Ortega of Chicago.
He was preceded in death by his mother; 2 brothers Anthony and Angel Galindo; and 1 sister: Rosario Galindo.
John worked as a carpenter and enjoyed woodworking. He was known as a jack of all trades with his favorite tool being duct tape. He will be remembered as a loving father, grandfather, friend, and jokester. John was of the Catholic Faith.
Cremation rites have been entrusted to Argo-Ruestman-Harris Funeral Home in Eureka.
Memorial Contirbutions may be made to the family. Online tributes and condolences may be made at www. argoruestmanharris.com

To send flowers to the family or plant a tree in memory of John Frank Galindo, please visit our floral store.

To send flowers to the family in memory of John Galindo, please visit our flower store.