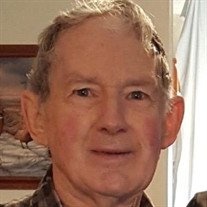 Surviving are his daughter Kelly Yoder of Eureka and son Brian Hart of Eureka; and two grandchildren Caleb and Shelby Yoder. His two grandchildren were the love of his life which was shown by his helping them achieve their adult dreams.

His early family life was spent in Hamilton County in Southern Illinois where he attended Delafield Grade School and graduated from McLeansboro Township High School in 1957. In that year, after graduation, his parents moved to Eureka where he attended Eureka College.

He started work in 1965 at the then Peoples Bank of Bloomington, now known as Commerce Bank. He worked for 17 years in the commercial loan department and the last 10 years in sales and marketing. He found out very quickly that he loved people and he loved to help people. He spent part of the 10 years conducting workshops telling would be entrepreneurs how to go about starting their own small business. He loved his role as a small business coach and traveled central Illinois conducting those workshops. He retired from the banking industry in 1996 and went to work full time as his own boss as a Small Business Coach.

Jack loved the outdoors and the residence he and Ruth lived in along the Mackinaw River in Woodford County. It enabled him to closely observe the children (deer, turkeys, coyotes, etc.) of Mother Nature.

There will be no formal services. Cremation will be accorded. Argo-Ruestman-Harris funeral home is assisting the family with arrangements. There will be a private graveside service at Olio Township Cemetery at a later date.

Memorials may be made to American Heart Association or First Baptist Church of Goodfield.

To send flowers to the family or plant a tree in memory of John "Jack" Hart, please visit our floral store.

To send flowers to the family in memory of John Hart, please visit our flower store.