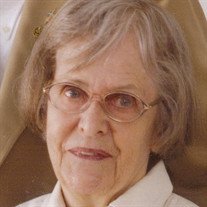 Christian funeral services will be held at 11 a.m., Wednesday, April 25, 2018 at Liberty Bible Church in Eureka. Pastor Tom Zobrist and Pastor Dan Waller will officiate. Visitation will be Tuesday from 4 to 7 p.m. at Liberty Bible Church and one-half hour prior to services at the church on Wednesday. Argo-Ruestman-Harris Funeral Home is assisting the family with arrangements.

Private interment will take place after the services on Wednesday at Elmwood Cemetery.

She was preceded in death by her birth parents, Otto and Mary Sipe Laskowske, two brothers, one sister, and her foster parents, Laurel and Ruby Johnston of Newport, MN, who raised her from the age of six. Later she completed her upbringing with Ruby Johnston Blomberg and Harry Blomberg of Emerald, WI. June spent a short amount of time in the State orphanage in Owatonna, MN.

She graduated from Clear Lake, WI High School in 1945, attended one year of college at Stout-U of WI-Menomonie, WI, worked in offices and stores until 1961, then returned to college for two years, graduating from Bradley University, with honors, August of 1963. She was a primary school teacher for nineteen years, then was a bookkeeper in her husband's office until he retired in 1987.

Her memberships included several teachers and historical organizations, and local church and homemakers groups. She was also a member of Liberty Bible Church in Eureka, IL and a devout re-born Christian. June enjoyed reading, sewing and decorating, corresponding with others, her extended family and meeting new folks "wherever".

In lieu of flowers, memorials may be made to the Russell Family Scholarship Fund, Illinois Central College Educational Foundation, 1 College Drive, East Peoria, IL 61611 for the benefit of Woodford County applicants pursuing a four-year college degree or to the charity of the donor's choice.

Online tributes and condolences may be made at www.argoruetmanharris.com.


To send flowers to the family or plant a tree in memory of June E. Russell, please visit our floral store.

To send flowers to the family in memory of June Russell, please visit our flower store.