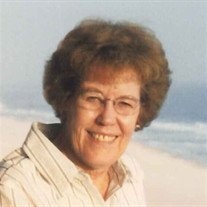 Karen was born to Jack and Lois Holmes on February 19, 1942 in Rock Island, IL. She was the
oldest of five children, and was soon followed by her three brothers, Jack (Judy) Holmes, Jr. of
Jerseyville, IL; Jeff (Marilyn) Holmes of Villa Grove, IL; Brent (Kathy) Holmes of Mattoon, and one
sister, Jane (Jim) Locascio of Lisle, IL. She attended school at Villa Grove High, and worked with
her father for the Villa Grove newspaper. After graduating high school, she worked at a
family-owned restaurant called The Colony House in Wisconsin, where she met and married
Douglas H. Mathews on October 5, 1961. He passed away on November 28, 2010.

The couple had two sons before they permanently relocated to Illinois, Dewar Mathews of
Eureka and Douglas (Kristen Weber) Mathews of Belleville, IL . Their final son David (Heidi Bishop) Mathews arrived after their move to Illinois. Karen thoroughly enjoyed being a homemaker, watching her children's swim meets, and vacationing every year at New Smyrna Beach in Florida. Her and her husband also traveled to countries across the world, including France, Greece, Costa Rica, Brazil, Switzerland, and numerous others. When they were not traveling, Karen and Doug could be found socializing with their many good friends. She was later blessed with six grandchildren, Tyler, Jeneca, Lynae, Luke, Ashton and Meghan.

In her free time, Karen enjoyed gardening, listening to Oldies, volunteering at the Food Pantry,
golfing, and spending time with her grandchildren. She was considered by her family and friends to be a strong, selflessly compassionate woman who loved like no other. Emily Dickinson once wrote, "Unable are the loved to die. For love is immortality." As she was loved deeply and widely by all who knew her, it goes without saying that Karen will remain immortal in the many lives she touched.

Visitation will be at the Argo-Ruestman-Harris Funeral Home on Sunday, October 5th from 4-7.
A prayer service will be held at 3:45 pm prior to the visitation. Funeral services will be held in her home church of St. Luke's Catholic Church in Eureka at 10:00 am on October 6. Father Eugene Radosevich will officiat. Burial will be in Olio Township Cemetery in Eureka.

In lieu of flowers, memorial contributions may be made to St Luke's Catholic Church or the Eureka Food Pantry. Online condolences may be directed to the family at www.argoruestmanharris.com.

To send flowers to the family or plant a tree in memory of Karen Mathews, please visit our floral store.

Please click here to view the video tribute
To send flowers to the family in memory of Karen Mathews, please visit our flower store.