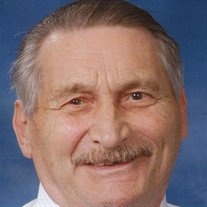 He was born on July 6, 1930 in Mannheim, Germany, the only son of Valentin and Else (Kern) Eschelbach. He married Mary E. Lenaway on July 25, 1959 at the Sacre Coeur Catholic Church in Creve Coeur, IL.

He was preceded in death by his parents and step-father, Karl Roechner.

Prior to coming to the United States, Karl lived in Mannheim, Germany where he attended grade school from 1937-1945. After grade school, he attended electrician trade school from 1949-1952. Afterwards he worked at an electronics factory from 1950-1953 in Mannheim, Germany. After coming to the United States, he worked as a laborer at Illinois Plating Company, Catholic Cemetery Association in Peoria, and at Peoria Tube Bending Company as a machinist from 1954-1957. After attending DeVry Technical Institute in Chicago, he graduated in 1957. From 1959-2000 he worked at Republic Electric & Development Company in Peoria. He served on the Deer Creek Village Board from February 20, 1990 to the present and from 1996 to the present as a member of the Triangle of Opportunity, a central Illinois economic development organization.

His hobbies included repairing bicycles for the Knights of Columbus of Morton's bike ministry, repairing over 1,500 bicycles in his basement bike orphanage.

Karl was a member of St. Luke Catholic Church in Eureka, IL where a funeral mass will be held at 12:00 pm (noon)(CST) on Monday, January 22, 2018. Father Eugene Radosevich will officiate. Visitation will be held on Monday, January 22, 2018 from 10:00-11:30 am at the Argo-Ruestman-Harris Funeral Home in Eureka. Burial will be in the Mt. Zion Cemetery in Deer Creek. Argo-Ruestman-Harris Funeral Home in Eureka is handling arrangements for the family.


To send flowers to the family or plant a tree in memory of Karl Eschelbach, please visit our floral store.

To send flowers to the family in memory of Karl Eschelbach, please visit our flower store.