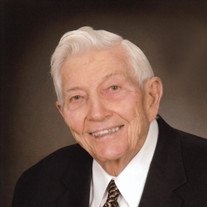 GOODFIELD- Kenneth Coulter, 93, of Goodfield , passed away at 11:09 PM on Saturday, November 14, 2015 at Advocate Bromenn Medical Center in Normal.

Funeral services will be held at 11 AM on Wednesday November 18, 2015 at the Goodfield Community Church with the Revs. Chuck and Adam Wilson to officiate. Visitation will be from 4-7 pm on Tuesday, November 17, 2015 at Argo-Ruestman-Harris Funeral Home in Eureka and 1 hour prior to services on Wednesday at church. Burial will be in Olio Twp. Cemetery, Eureka.

He was preceded in death by 2 sisters, Mary Bade, and Kay Coulter.

Ken enjoyed serving his Lord first and foremost, and was a member of the Goodfield Baptist Church which his Grandfather, H.M. Robinson, built for his workers. The farm of H.M. is known as the Brick House and Conklin Dinner Theater now. He served as a Deacon, Moderator, Sunday School teacher for children and adults. He went to Taylorville schools and graduated from Goodfield High School. He also attended Purdue University in Indiana.

He was a long time member of the Central Illinois Angus Association, American Angus Association, National Cattleman's Association, Woodford County Farm Bureau and the American Legion in Eureka. He served as secretary of the Central Ill Angus Association for over 20 years. He was a 4-H leader for 25 Years, served as Beef Superintendent for the state fair and conducted the Governor's Champion Livestock auction for 8 Years. He also served on the Heart of Illinois Fair Board and Auctioned off the champions for many years. He was a broker in his own company Ken Coulter and Associates with his wife as his partner. They farmed, raised and showed Angus cattle with their family.

He organized the first Mennonite Relief Sale at the Central Illinois Angus barn (now gone) when asked by Clarence Yordy and John Roth. He auctioned and helped organize the sale for almost 40 years. He helped with other charities such as the Advocate Hospital Auction in Eureka, the Youth Farm sale for over 30 years and the Maple Lawn sale in Eureka. He auctioned when requested for many other charities, hog and Angus sales in many states.

He was a pilot in World War II, served as a Second Lt and flew B25's in the Eastern Air Command from Sept 43 to Jan 1945 He was one of ten, from Douglas, Georgia selected to attend West Point for his pilot training.

In lieu of flowers memorials may be made to the Goodfield Community Church formerly Goodfield Baptist Church, or the Chapel at Advocate Bromenn Eureka Hospital or a charity of your choice.
Online condolences may be directed to his family at www.argoruestmanharris.com

To send flowers to the family or plant a tree in memory of Kenneth Coulter, please visit our floral store.

To send flowers to the family in memory of Kenneth Coulter, please visit our flower store.