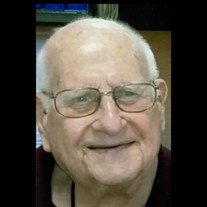 Leo Traister of Eureka, Illinois passed away peacefully on September 26, 2020 at the age of 101 with family by his side.
He was born on September 9, 1919 in Sterling, IL the son of Owen and Nellie Lewis Traister. He married Betty L. Trenary on March 24, 1946 in Danville, IL. She passed away on September 5, 2016.
Survivors include two daughters, Toni (Mike) Wittlich of O'Fallon, IL; Carol (David) Cooper of Monticello, IN; four granddaughters, Tara (Bob) Bergman; Andrea (Tim) Becherer; Karen (Mark) Wheeler-Lee; Christy Cooper; six great grandchildren, Maddie, Jenna, RJ, Peyton, Blake and Joseph.
He was preceded in death by his parents, his wife Betty and two sisters, Madolyn Adriaenssens, Helen Combes.
In August 1948 he was employed by Viola Community High School where he taught and coached football, basketball and track. When Viola and nearby New Windsor consolidated to form the Winola Unit District, he remained at the high school in Viola. In 1952, he was appointed Principal of Winola High School and continued in coaching as well. During his time in Viola, he studied during the summers at University of Illinois, earning a master's degree in Secondary School Administration. Leo returned to Eureka College in 1956 where he coached football, basketball, track and golf. Within the many years at Eureka College he served as Athletic Director. Assistant Director of Admissions and facilitated the addition of many sports, including a full program for women's athletics and the soccer program. Leo retired as Athletic Director and coach in 1984 with a full professorship and continued to serve in the football program as defensive line coach. He was awarded the title of Professor Emeritus. The Traister Field for Soccer was named for and in honor of Leo in October 2008. He received the Eureka College Alumni Merit Award and was inducted into the Eureka College Athletic Hall of Fame and the Rock Falls High School Athletic Hall of Fame. He received an honorary doctorate on February 8, 2013.
He was a member of Eureka Rotary and a Paul Harris Fellow. He was a chair member of Eureka Sportsmen's Club and a life member of American Legion Post #466 in Eureka and a member of Lambda Chi Alpha Fraternity. He was a member of Eureka Christian Church (Disciples of Christ ) where he served as deacon and elder. He remained in the Eureka community and was an avid Red Devils fan and supporter of the college.
Due to Covid-19 the family will have a private service at the church with the Rev. Jennie Churchman will officiate the funeral will be livestreamed at 1:00 p.m. on Thursday, October 1, 2020 at the following websites eurekachristianchurch.org or facebook.com/eurekacc/live. Graveside services will follow the funeral services at Olio Township Cemetery where military rites will be accorded at the grave. Argo-Ruestman-Harris Funeral Home in Eureka is handling arrangements for the family.
Memorial contributions may be made to the Eureka College Traister Scholarship Fund, Eureka Christian Church or Apostolic Christian Home of Eureka. Online condolences may be sent to the family at www.argoruestmanharris.com.


To send flowers to the family or plant a tree in memory of Leo Traister, please visit our floral store.

To send flowers to the family in memory of Leo Traister, please visit our flower store.