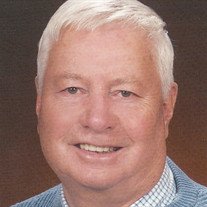 Lewis E. "Lew" March, 80, of Eureka, passed away at 9:40 a.m., Friday, December 15, 2017 at his residence.
He was born February 3, 1937 in Carrington, ND to Charles L. and Maude (Goldsmith) March. He married Dorothy "Dodi" Wentz on August 24, 1963 in Minnewaukan, ND. She survives.
Also surviving are his children; Jeffrey (Laura) March of Winnebago, IL, Jason March of Lena, IL, Julie (Sean) O'Brien of Chillicothe, IL; one brother Albert (Donna) March of Elizabethtown, KY; and six grandchildren, Hannah and Hayden March, John, Molly, Josephine and Sophia O'Brien; and several nieces and nephews.
He was preceded in death by two brothers, Charles and Clifford and two sisters, Helen Holth and Doris Keyser.
Lew served his country honorably for 37 years in the U.S. Army retiring as a Lieutenant Colonel. He served overseas in Germany and was later deployed to serve in the Vietnam War as a combat engineer officer, earning the Bronze Star. He received his Bachelor's degree in Business from the University of Nebraska and his Master's degree in Business and Human Resources from Webster University in St. Louis.
Lew worked as the operation director for Eureka College and at Northwoods Mall in Peoria, retiring in 2003. He enjoyed spending time with his family. Lew was very involved with Boy Scouts Troop 57 and St Luke's Catholic Church. He touched the lives of many and will be missed dearly.
Visitation will be from 4 to 6 p.m., Monday at Argo-Ruestman-Harris Funeral Home, Eureka with a Rosary from 3:45 to 4 PM. A funeral Mass will be held at 10 a.m., Tuesday, December 19, 2017 at St Luke's Catholic Church, Eureka. Father Eugene Radosevich will officiate with visitation one-half hour prior to services at the church on Tuesday. Burial will be in Olio Township Cemetery.
Memorials may be made to St Luke's Catholic Church, Boy Scout Troup 57 or a local charity of your choice.
Online tributes and condolences may be made at www.argoruestmanharris.com.

To send flowers to the family or plant a tree in memory of Lewis E. March, please visit our floral store.

To send flowers to the family in memory of Lewis March, please visit our flower store.