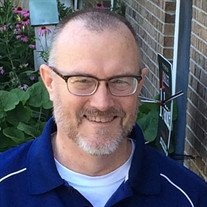 The Rev. Lindsay D. Churchman, 54, of Eureka passed away on Saturday, September 19 at Advocate Eureka Hospital after a brief but intense battle with cancer. Lindsay was born on November 22, 1960 in Washington, Iowa to L. Duane and Darlene Sims Churchman.
He married Jennie Huff Churchman on June 14, 1997. She survives.

Lindsay was actively involved in the Order of Saint Luke, a religious order within The United Methodist Church dedicated to sacramental and liturgical scholarship, and also participated in many Conference committees and boards. He served on the alumni councils of Brite Divinity School, TCU, and Iowa Wesleyan College and on the Board of Directors at Maple Lawn Homes in Eureka. He was also an Oblate of St. Scholastic Monastery in Fort Smith, Arkansas. His greatest passion in ministry was working with the Upper Room's Academy for Spiritual Formation. He served on leadership teams for many Five-Day Academies and one Two-Year Academy.

Lindsay loved his family first and foremost. He was a dedicated family man. He also loved to play golf; to watch sports (especially hockey, English Premier League soccer, and college football); to read Cold War spy novels and Dick Francis mysteries; to listen to classical and sacred choral music from his extensive collection; to make pizza from scratch for the weekly Family Pizza Night; and to watch his favorite TV shows and movies. For ten years, he sang with the Fort Worth Symphony Orchestra Chorus. He also loved all things Disney. He was beloved by his parishioners and respected by his colleagues. His family will miss him deeply.

The family would like to thank the many health care professionals who walked with us in this journey. We would like to extend a special word of gratitude to Dr. Christopher Hughes of Eureka.

A memorial service will be held on Saturday, October 3 at 5:00 pm at First United Methodist Church in Normal with the Rev. Dr. Don Jackson, the Rev. Kim Burke, the Rev. Ted Mitchell, and the Rev. Beth Fender officiating. Visitation will be held at the church prior to the service beginning at 3:00 pm. Memorial gifts may be made to the Academy for Spiritual Formation at The Upper Room Ministries, P.O. Box 340004, Nashville, TN, 37203-0004 or go to http://academy.upperroom.org/donations for online giving.

Argo-Ruestman-Harris Funeral Home in Eureka is assisting the family with arrangements. Online tributes and condolences may be sent to the family at www.argoruestmanharris.com.

To send flowers to the family or plant a tree in memory of Lindsay D. Churchman, please visit our floral store.

To send flowers to the family in memory of Lindsay Churchman, please visit our flower store.