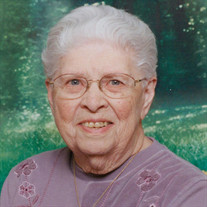 Eureka-Lola Harper, 100, of Eureka, IL passed away at 11:15 am on Wednesday, December 14, 2016 at the Eureka Apostolic Christian Home where she had been a resident.

She was preceded in death by her parents, one son, John Harper; three sisters, one brother, three step-sons, and one step-daughter.

Lola worked for the Woodford County Treasurer's Office for 25 years.

She was a member of the Eureka Church of the Nazarene where funeral services will be held at 11:00 am on Wednesday, December 21, 2016. Rev. Michael Stipp will officiate. Visitation will be held on Tuesday evening from 5-7 pm at the Argo-Ruestman-Harris Funeral Home in Eureka and one hour prior to the service on Wednesday at her church. Burial will be in Olio Township Cemetery.

Memorial contributions may be made to the Eureka Church of the Nazarene or American Diabetes Association. Online condolences may be left at www.argoruestmanharris.com.

To send flowers to the family or plant a tree in memory of Lola Harper, please visit our floral store.

Please click here to view the video tribute
To send flowers to the family in memory of Lola Harper, please visit our flower store.